We often think of microbes as single cells that can be easily targeted by drugs, alternative medicine or our own immune systems. However, the reality is much more complicated. Many of these pathogens have evolved remarkably sophisticated ways to evade our best efforts at treatment.

Some of you may have heard of biofilms, especially if you’re familiar with Lyme disease, and how they can protect pathogenic microorganisms from your immune system. Biofilms are structures that are formed naturally by many bacteria and fungi. They can make conditions like urinary tract infections, ear infections, and Candida overgrowth much more difficult to treat.

This article will explain what biofilms are, and how they are relate to Fungal Yeast overgrowth. 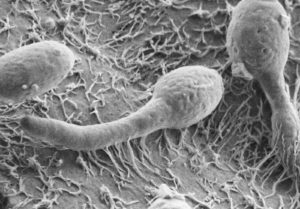 In a laboratory one can look at a virus, bacteria or fungus apply an antibiotic or other drug, and see under the microscope the pathogen destroyed. However, as impressive as this methodology can be, it does not take into account what happens when large numbers of those microorganisms group together in the human body.

Research over the past 20 years has started to show that microorganisms behave very differently when grouped together. In fact, some treatments that might work very well on a single cell can be complete failures against a large, well-established population. In many cases, this is because of biofilms.

A biofilm is a polysaccharide matrix that acts as a protective structure for the microorganism. In effect, the pathogen can hide within it. By producing a biofilm, the microorganism creates a shield to protect itself from whatever your practitioner and immune system can throw at it.

Biofilms can exist both inside and outside the body. Sometimes they can even be useful (there are a number of industrial applications), but for the most part they are bad news. Much of the research has looked at Candida biofilms on items like prosthetic heart valves, intravenous catheters, and hip replacements. However, biofilms are also part of the development of many clinical infections that develop in our bodies.

Of the many fungal varieties, Candida Albacans is the most common fungal biofilms, and is extremely difficult to treat. One group of researchers looked at the effectiveness of a group of anti-fungals against Candida biofilms. Researchers found that the anti-fungals were initially effective against Candida, but as the biofilm developed they became less and less effective. After 72 hours of biofilm development, the “C. albicans cells were highly resistant,” leading them to conclude that “drug resistance develops over time, coincident with biofilm maturation.” Other studies have shown “a near-total resistance to anti-fungal agents by biofilm-associated Candida.”

What are these biofilms made of? Candida biofilms are comprised of 32% glucose. So Candida needs sugar not just to proliferate but also to create the biofilm that protects it from your immune system.

For the most part biofilms do exactly what they are designed to do – protect the Candida Albicans cells from your immune system. There is no magic pill we can take to eliminate a Candida biofilm. It takes time and application. A longstanding Candida overgrowth has had plenty of time to create biofilms in your gut and other parts of your body like the liver, stomach lining, sinus, behind ear drum, vaginal canal, throat, feet, toe nails, to name a few.

To resolve a fungal overgrowth, one needs to adopt a multi-protocol system that has a proven track record. Chelation style absorption of candida fungus, starve the parasites with nutrient strategies, mega support of the immune system and the break-down of the biofilm is the proven approach.

These combined strategies along with the client’s commitment to the learning curve, the mental buy-in, is Longevity Sciences multi prong approach that has been adopted world-wide.

What Are Candida Biofilms?