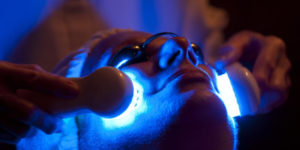 If you follow any celebrities on Instagram, chances are you’ve come across a picture of an LED treatment before.

Searching on the Internet one finds many Hollywood stars like Kim Kardashian using LLLT Facials. (apparently, she’s “really big on laser facials”). Or maybe you’ve seen someone wearing funky protective eyewear at a medispa or doctor’s office and all kinds of bright lights were involved? Yep, that would be it as well. LED skin treatments are all the rage nowadays. Here’s what you need to know about them.

There are various kinds of LED facials available on the market today, and the technology is rapidly evolving. Some skin treatments involve the use of blue light, while some only use red light.

The basic premise of LED skin therapy is that different colors trigger different reactions beneath the epidermis and penetrate the skin at varying depths. Blue light is generally used to kill the bacteria that accompanies acne.  This provides an effective treatment for blackheads and whiteheads.  Whereas, wavelengths of red light are normally used to speed up healing and stimulate collagen production, simultaneously shrinking enlarged pores and tightening the skin. 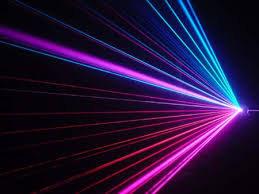 LED treatments are painless, non-invasive and no downtime is required. According to expert, Sacha Bourdage, in Montreal, Canada, “people are looking for a lot of alternatives these days… An LED treatment is great for targeting areas that are hard to hit with Botox and injectables, bringing out the plumpness and reducing the appearance of crow’s feet and other wrinkles.”

The treatments can last a mere few minutes, depending on the type of technology used. That’s right! Perfect during lunch hour, much?

OK, but do they really work?

Dr. R. Glen Calderhead, one of the world’s leading experts in phototherapy and photosurgery, seems to think so. In a recently published study, he states that “low-level light therapy (LLLT) with light-emitting diodes (LEDs) is emerging as a solid medico-scientific modality. Actually, there is a substantial buildup of corroborative bodies of evidence for its efficacy and elucidation of the modes of action. Reports are appearing from many different specialties; however, of particular interest to plastic surgeons treating the aging face is the proven action of LED-LLLT on skin cells in both the epidermis and dermis and enhanced blood flow. Thus, LED-LLLT is a safe and effective stand-alone therapy for patients who are prepared to wait until the final effect is perceived.”

So, yes — but not overnight.

And the price is rather steep, too: count on average $50 to $300 per treatment. And although some customers who’ve undergone blue light therapy claim that most of their dimples disappeared after a single treatment, Bourdage advises caution: “It’s not a cure. It’s a treatment.” Typically, you’ll need at least four treatments before you start noticing results. In order to rejuvenate the skin’s appearance, improve its texture and reduce the appearance of wrinkles, a few weeks will be required. The good news? The benefits are cumulative, and one treatment per year is normally sufficient to maintain the results afterwards.

“LED light has demonstrated significant efficacy for various skin pathologies,” says Bourdage. “The LED light by itself can stimulate specific cell lines and improve certain aspects of the skin, and the technology can be further improved when combined with light-absorbing chromophore gel, which allows the LED light to penetrate deeper into the skin.

Most LED treatments are over in less than twenty minutes.  You will feel a warm, pleasant sensation can be felt over the entire face. While you’re there you can listen to some background music, mediate, even take a power nap!