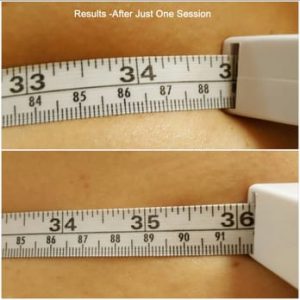 The Non-Invasive Alternative to Liposuction

The science behind the 635nm technology started in the late 1990’s when a Colombian physician discovered that exposing a patient to mid-600nm light prior to liposuction made the procedure much easier to perform. The patients who were exposed to the light and underwent liposuction surgery immediately afterward had fat that was much easier to extract, almost as if the fat had been melted while still in their bodies.

But there wasn’t any heat being generated by this light and there was no discomfort whatsoever experienced by the patients. To determine what occurred in this process, a clinical study was performed that involved fat cells from 12 subjects being exposed to 635nm light energy: within 6 minutes of exposure, 99% of the cell contents were released through the cell membrane/walls. It was determined the light initiated a photo-biostimulation of the mitochondria that caused a reaction within the cell, creating what are referred to as “transient pores” in the cell membrane/wall, allowing these openings to release the contents of the cell.

Additional clinical studies have proven that this release of the cell contents causes the patient to experience a reduction in the circumference of the treated area: one study involved 86 patients who experienced an average 3 inch reduction and another study involving 689 patients who lost an average of 5 inches. The 635nm device used in these studies delivered a very low level of light energy due to the fact the light is low powered, the light source was 4″ or more away from the subject’s skin surface, and the light was moving: very little light energy reached the fat cells under the skin. Additionally, the studies only involved the application of the light and the test subjects were not involved in any additional steps to assist in the processing of the excess fats released within their bodies.

Based on these facts, it is clearly obvious the 635nm technology does have the desired effect on the fat cells and can deliver results when the full protocol is utilized. When the mitochondria of the fat cells are stimulated by the 635nm light energy, referred to a photo-biostimulation, a signal is generated that opens the transient pores of the cell wall, resulting in a release of the contents of the cell. These contents are triglycerides; fatty acids, glycerol and water. At this point, the fat cell deflates much like a balloon that is emptied of its air volume. The triglycerides are deposited in the interstitial region of the body as a temporary holding vessel.

This is where the protocol becomes important. If a patient’s body is properly prepared, the majority of the fatty acids that are present in the interstitial region of their body will be carried to their liver, processed, and released to their kidneys resulting in the elimination of those fatty acids in their urine and/or stools. If the patient is drinking a sufficient amount of water and gets some minimal exercise immediately after the exposure to the light, their lymphatic system will be stimulated and their interstitial region will be flushed of the excess fatty acids. Once the interstitial area has been vacated of the majority of the fatty acids, the studies proved that the treated area of their body will become reduced in circumference. When the lymphatic system delivers the fatty acids to their liver, it is most important that the patient has not been overeating and their liver is capable of processing a majority of these waste products.

By being on a healthy diet, more specifically a “calorie neutral” diet, and refraining from eating two hours before and two hours after the exposure to the light, more of the fatty acids will be processed and eliminated. If patients take a supplement that assists the liver in terms of health and capacity to process an increased amount of waste, a greater portion of the fatty acids will be eliminated. Lifestyles that create a stress on the liver will obstruct this process, so consumption of alcohol is not recommended while undergoing these treatments.

The LipoMelt System is not intended for use in the diagnosis of a disease or any other condition or in the cure, mitigation, treatment, or prevention of disease, and are not intended to affect the structure or function of the body. This program is cosmetic in nature and does not claim to impart any health benefits. The statements on this web site have not been evaluated by the Food and Drug Administration.